Tim Ferriss (author of the Four Hour Work Week, Four Hour Body (4hb) and now the Four Hour Chef), is a polarizing character: people either love him or hate him. I have loved his work since the first book came out, and was so thrilled when he commissioned me to illustrate his long-awaited cookbook, the Four Hour Chef.

Little did I know that this publication would be even more controversial than anything he’s done before;Â The Four Hour Chef is the most banned book since the 1929 book, Lady Chatterly’s Lover.Â If you missed the big news,Â The 4-Hour ChefÂ is being boycotted by Barnes & Noble andÂ 700+ bookstores across the United States. Why? because the book is first forÂ Amazon Publishing.

I’m so excited to be a little part of history!

I am honored to be showcased in several sections, including several cooking demonstrations (edited by Tim Ferriss himself!) and a large 3 page spread of my herb illustrations! Now I feel inspired to create a cookbook of my own! 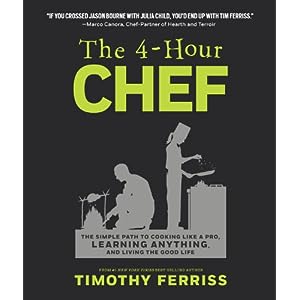